Reason of this Foundation

I. The reason of this Foundation

The Foundation Manuel Giménez Abad (FMGA) for Parliamentary Studies and the Spanish State of Autonomies is a Foundation with seat at the regional Parliament of Aragon in Zaragoza.

Manuel Giménez Abad was respected and admired by all parliamentarian groups, because of his conciliatory character and his capacity to dialogue. Due to this, after his death, all parliamentary groups of the Cortes of Aragon (the regional parliament of Aragón), agreed to reminiscence his memory and simultaneously to claim the freedom and democratic values, brutally violated in his murder. With this motivation, the idea of building a foundation came up, which should be devoted to contribute to the research, knowledge transfer and dissemination of the democratic values, the parliamentarian institution and territorial distribution of power.

This idea was put into practice on the 18th of April 2002, when the Foundation for Parliamentarian Studies and the Autonomous State “Manuel Giménez Abad” was constituted in Zaragoza. The founders were the Cortes of Aragón, the town hall of Jaca, and the savings banks: Caja de Ahorros y Montes de Piedad de Zaragoza, Aragón y Rioja and Caja de Ahorros de la Inmaculada. 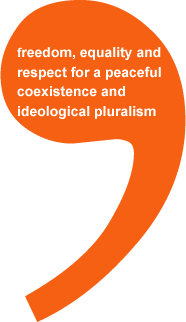 II. Purposes of the Foundation

The main objective of the Foundation is to contribute to the research, knowledge dissemination and better understanding of parliamentary studies and the model of territorial distribution of power in the Spanish State of Autonomies.

The pluralism inherent to a parliamentary institution also is one of the main features of the work of the Foundation. In fact, all activities are supported by all parliamentary groups with representation in the Cortes of Aragon. Thus the Foundation aims with its activities to represent the existing plurality of our society - a reflection of what politics is for Parliament itself.

Taking as a starting point the parliamentary nature, the Foundation aims to serve as a bridge, as a meeting place, between society and Parliament. On the one hand, the Foundation seeks to attend the Cortes of Aragon as information source and study center on issues of relevance for the political agenda, as well as an instrument for direct relations with citizens. On the other, the Foundation wants to be an open channel for all citizens to interact more intensively with the Parliament.

III. The Board of Trustees of the Foundation

The Board of Trustees is the supreme organ of government and representation of the Foundation and is also responsible for the control and direction of the management.

The Scientific Advisory Committee is made up of distinguished specialists on the subjects that are part of the interests of the Foundation.

The Foundation was built up with the intention of developing an excellence platform, which should contribute to a better understanding and knowledge based debate of the current democratic model and the model of political decentralization in the Spanish State of Autonomies. From this perspective, it is a vocation of the Foundation to contribute to the elaboration and dissemination of academic studies and comparative experiences. The knowledge transfer between policy makers, practitioners and academics as well as the interchange of experiences and best practices among specialist and the broad audience are key objectives of these activities.

In general terms, the activities of the Foundation are concentrated in four key areas:

Within these key areas, the Foundation develops important outreach and research activities. The Foundation organises every year more than 40 seminars and conferences at the national, European and international level offering citizens stimulating debates.

Singular attention deserves the political and institutional situation in Iberoamerica and the structure and functioning of the European Union. With this activities the Foundations aims to reach the broadest possible spectrum of interested people in Spain and at the international level.

New technologies have a twofold presence in the work of the Foundation. On the one hand, as an internal working tools and as dissemination channels of our activities. In this sense most seminars are transmitted via the internet and social media and available in our video archive. And on the other hand new technologies are a genuine subject of study and theoretical reflection, understanding that these technologies have a very significant impact on the political and institutional life.

As result of all these actives there is an important editorial work. The Foundation has an editorial line of growing importance. There are mainly three collections: Monographs, Proceedings and Studies. Publications of these collections are based on conferences outcomes, workshops and other activities. Moreover in recognition to outstanding academic contributions made to parliamentary studies and on questions related to Federalism and Decentralisation the FMGA awards two prizes each year. Alongside these three collections, there is the biannual publication of the electronic journal Manuel Gimenez Abad. Besides these biannual volumes, we publish annually one or two special issues.

The Foundation contributes actively to research and knowledge transfer in its topics of interest. To this end, the Foundation is involved in various research projects, at the national and international level; bringing together a significant number of researchers, with special care to promote the careers of young researchers, and partners with national and international institutions of maximum relevance.

In this context the Foundation works closely in collaboration with the main research institutions and political foundations dedicated to parliamentary studies and to the study of Federalism and Decentralisation and has signed several cooperation agreements. The Foundation also collaborates with all main Spanish Universities and research centres.
Among the international activities of the Foundation, we would like to underline the relationships established with institutions from countries such as Canada or the United States, and Germany, Austria and Great Britain. Furthermore the activities of the Foundation in Iberoamerica have been growing during the past years. An outstanding example for this is the “School of Government". The “School of Government" has been built up with the objective to offer assistance and services to parliamentary chambers. The initiative has been supported be the Spanish Congress of Deputies. One example of particular relevance of this activity is the “School of Government" developed and implemented jointly with the Parliament of the Republic of Uruguay.